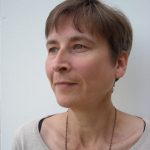 Kristel Van Steen was born on the 3rd of June 1969, Dendermonde (Belgium). She received a Master of Science degree in 1991 and a Doctoral degree in 1996 both in mathematics from Ghent University (Belgium). She also received a Master of Science degree in Biostatistics in 1999 and a second Doctoral degree in Biomedical Science in 2005 from Hasselt University (Belgium). In the meantime, as a fellow statistician at the E.O.R.T.C. (Headquarters, Brussels, Belgium), she gained expertise in Quality-of-Life data integration in clinical trials protocols and Quality-of-Life data analysis. She worked on family-based genetic association tests during a post-doctoral fellowship of two years (2003-2005) at the Harvard School of Public health (Harvard University, Boston, USA). During her stay in the US she also acquired Biotechnology Project Management skills at the Harvard Extension School and the Massachusetts Biotechnology Council. Currently, she is Professor at the University of Liège (Belgium). There, her group BIO3 (Biostatistics, Biomedicine, Bioinformatics) is part of the academic research center GIGA (Interdisciplinary Group of Applied Proteomic), in particular of the GIGA-R Medical Genomics Thematic Research Unit. She has been GIGA-R Thematic Research Unit Director of Systems Biology and Chemical Biology and of Medical Genomics during 2014-2018. Since October 2016, she also holds a part-time professorship position in Systems Medicine at the KU Leuven Department of Human Genetics. In addition, she is an honorary guest research professor at the Department of Biomolecular Medicine at Ghent University and is a teacher at the University of Antwerp. Kristel Van Steen has built up a recognized expertise in developing and applying methods to detect gene x gene and gene x environment interactions and in unifying biological and statistical evidence in genetic epidemiology. Since 2010 she gradually started moving her interests in systems genetics towards integrative omics-stratified precision medicine and systems medicine.